With the construction of the Arsenal at the end of the 19th century, Pula became the home port of the Austro-Hungarian Navy. With the arrival of both the armed forces and the new civilian population originating from all parts of the Monarchy, Pula developed into the largest Istrian city. The population growth and the spread of contagious diseases made it necessary to open a hospital and so in 1861 the Imperial and Royal Navy Hospital (K.u.K. Marinespital) was opened. The hospital housed on its premises its own pharmacy (K. u. K. Marinespital Apotheke).

Until 1990, when the Historical and Maritime Museum of Istria - Museo storico e navale dell’Istria initiated the procedure for its protection, the pharmacy was the holding of the Historic Room of the Military Hospital in Pula. In 1991 the PPMI took possession of the objects belonging to the pharmacy (furniture, stalls, books, etc.) and in 2005, on the occasion of the 50th anniversary of the foundation of the Museum, exhibited them in a permanent exhibition.

The exhibition plan is thematic. Over six hundred items are displayed in several units - the introductory, technological, scientific, storing and analytical segments of the pharmaceutical profession. The exhibition features a legend in four languages and a map. The legend provides the basic information on pharmacy in Istria, while the map offers a variety of data.  The map scale is 1:250000. Drawn on the map are changes in the boundaries of the Istrian territory during the 20th century as well as information on the number of pharmacies in the larger Istrian cities at four points in time (the years 1878, 1902, 1941, 2005), selected to show the increase in the number of pharmacies as a consequence of the development of the cities after the construction of the Arsenal and the arrival of the Austro-Hungarian administration, the situation during the period after the beginning of the Second World War up to present day.

The belief in divine protection from illness resulted in the construction of churches bearing the names of early Christian martyrs Ss. Cosmas and Damian who, according to the legend, devoted their lives to the care for the ill. It is for this reason that the locations of the churches bearing their names have also been drawn into the map.

The basic and inevitable part of the display is represented by the original period furniture made of mahogany, consisting of five items: the cabinet, the corner showcase, the glass showcase and two showcases with shelves and drawers, all belonging to the Historicism period of the second half of the 19th century. The furniture and other elements are arranged as follows: the two longest showcases are located centrally within the exhibition space, representing a longitudinal axis around which the visitors are able to circulate. The cabinet is positioned at the very entrance behind which is a gypsum-cardboard wall that displays the reliefs of the Greek gods Asclepius and Hygieia, patrons of doctors and pharmacists, displayed in almost every pharmacy at the time.

The second long showcase displays assorted apothecary bottles, boxes and containers displaying the labels of raw materials used by the pharmacists - solid substances and liquids - oils, tinctures, alcohols and acids, displayed according to the rules for pharmaceutical dispensing practices. The corner showcase placed at a right angle with respect to the long showcases represents the Venena, the closed-up section of the pharmacy. These locked showcases were used for the safekeeping of strong-acting and poisonous substances whose packaging was distinguished by the cross or the skull and crossbones pattern.

The scientific section of the pharmacy display is represented by a handy pharmaceutical library whose shelves contain medical and pharmaceutical titles, as well as professional regulations and laws, while the storage segment consists of a showcase with a clock, which was used as a pharmacy storage room containing large apothecary pots and jars and analytical scales for precision measuring.

The final section of the display consists of two simulated apothecary tables which contain a series of items necessary for formulating of medicines and which represent the synthesis of the theoretical and practical work of a pharmacist. By protecting and presenting of these museum holdings the Historical and Maritime Museum of Istria - Museo storico e navale dell’Istria mirrors the atmosphere of a pharmacy at the beginning of the 20th century and communicates to the museum visitors the basic definition of the pharmacy – the science about the knowledge, preparation, testing and preservation of medicines. It also contributes to the cultural, historical, educational and tourist offer of the city of Pula and Istria. 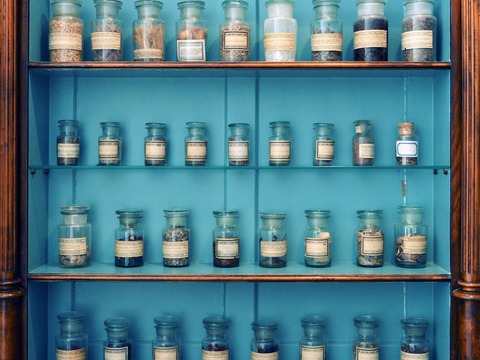 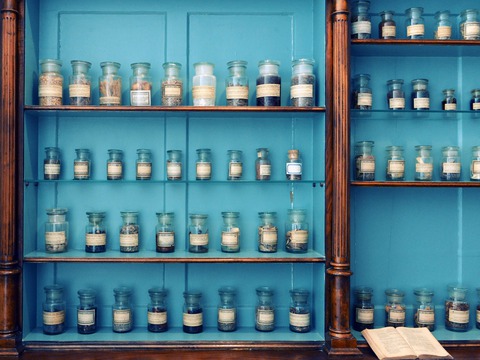 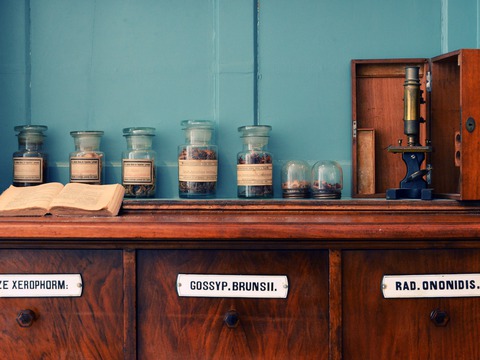 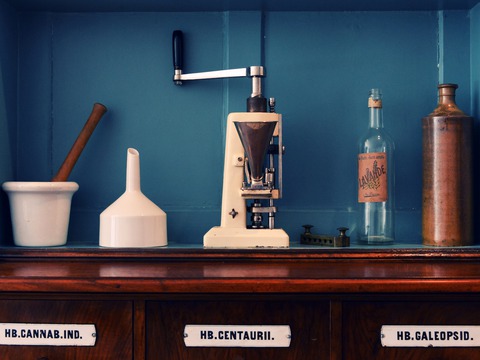 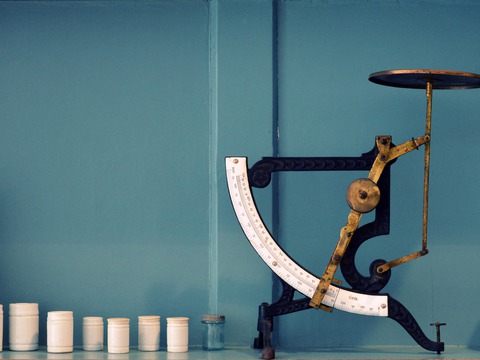 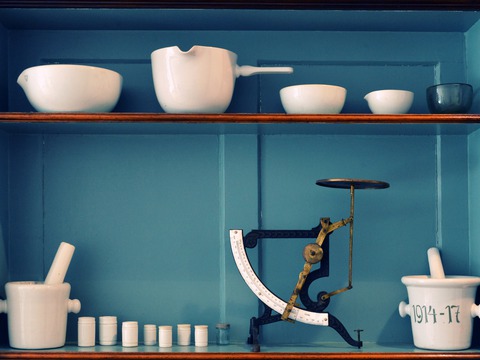 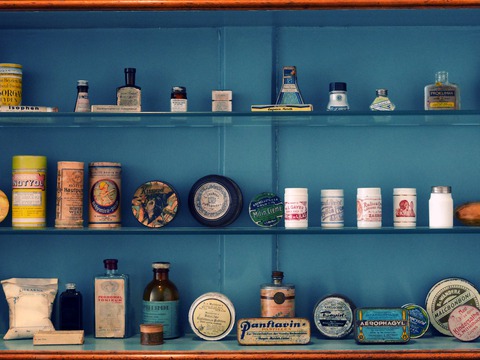 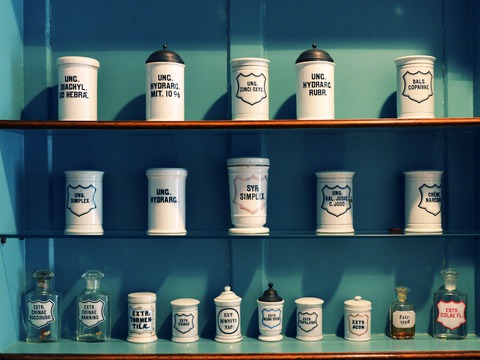 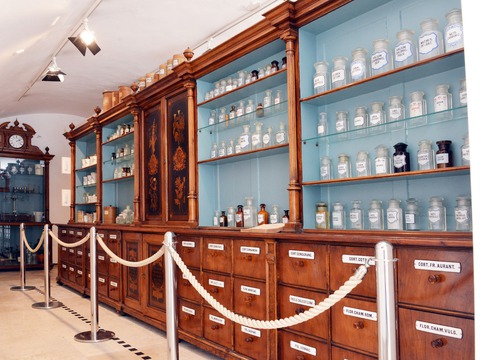 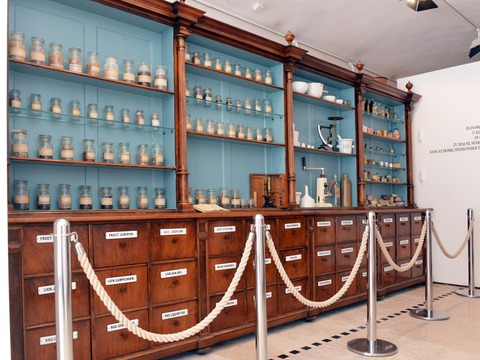 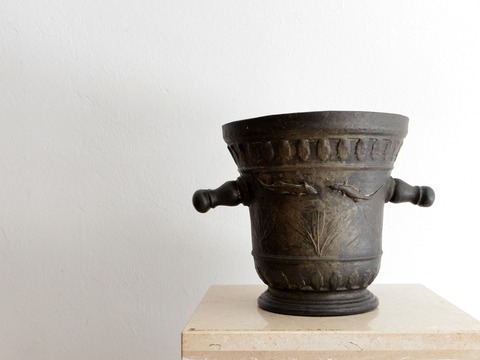 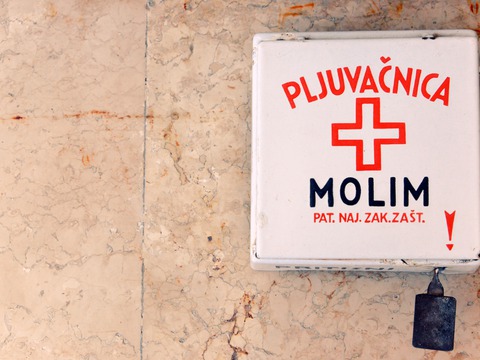 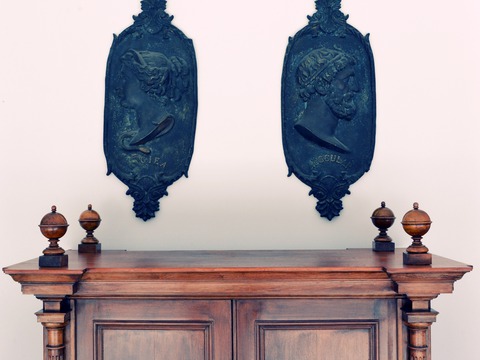